August 03, 2019
A roundup of the week's news of birds and the environment: 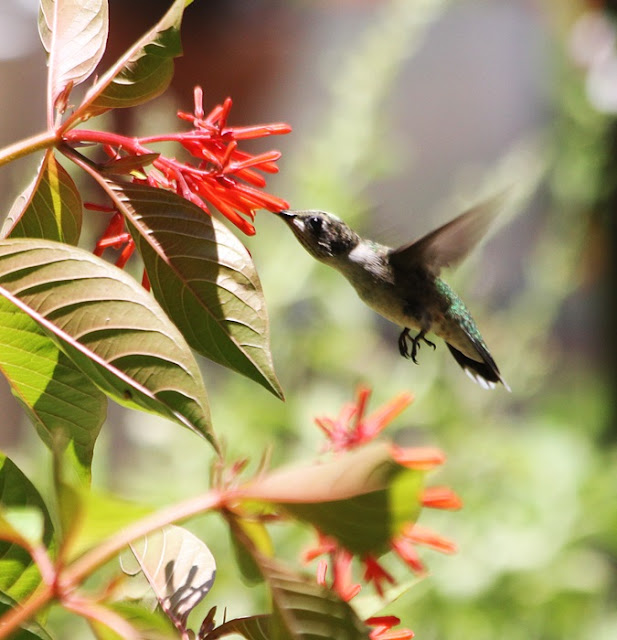 A female Ruby-throated Hummingbird enjoys a sip from the blossoms of Hamelia patens, the "hummingbird bush".

July was the hottest July on record for the planet since such records have been kept (about 1850). All records are not yet in but enough have accumulated for scientists to make that declaration.

The heat dome that caused record high temperatures in Europe shifted to Greenland and is causing unprecedented melting of the fragile ice sheet there. If the entire Greenland ice sheet ever melted, it would raise sea levels worldwide by 23 feet.

Meanwhile, the National Oceanic and Atmospheric Administration is warning that coastal flooding that happens without rainfall or hurricanes, so-called "sunny day flooding, is getting worse.

It has been a devastating summer for the endangered North Atlantic right whale. Since the start of June, eight of them, representing two percent of the total worldwide population, have been found dead in Canadian waters. Conservationists had believed they were beginning to make progress in protecting the animals, so this is a heartbreaking setback.

The grizzly bears in and around Yellowstone National Park have been restored to the endangered species list by the U.S. Fish and Wildlife Service following a court decision last year that the government had violated the Endangered Species Act in delisting them.

The U.S. Fish and Wildlife Service Environmental Conservation Online System has posted an interactive map that shows an endangered species for each state with information about the species and what is causing it to be endangered.

The new acting director of the Bureau of Land Management, William Perry Pendley, does not believe that the government should own any public lands. He is of the opinion that they all should be opened up for gas and oil development and has sued the Interior Department over the years to try to make that happen. Now he will be in charge of our public lands.

The blog "In Defense of Plants" has an appreciation of the Liatris family of plants, aka "Blazing Stars", staple bloomers in the summer garden and favorites of many butterflies.

The state of Maine and Maine Audubon Society have a project of mapping out where roadkills occur. They utilize an online system for the public to report sightings of such kills. The hope is that by defining the places where most kills happen, they will be able to build tunnels or overpasses for wildlife in those areas to keep them off the roads.

We know that feral cats and pet cats that are allowed outdoors can do untold damage to the environment. In Australia, a single cat has destroyed an entire bird sanctuary for vulnerable native seabirds called Fairy Terns. The cat was directly or indirectly responsible for the deaths of six adults and 40 chicks in the sanctuary and the birds subsequently abandoned the area.

House Democrats on the House Energy and Commerce Committee have a goal of achieving net-zero emissions across the United States economy by 2050. They are starting hearings to devise a plan for meeting that goal.

The current administration in Washington has removed one-quarter of the references to climate change on federal websites. It is unlikely they will stop there.

It seems reports of their demise were exaggerated. Two ferns that had not been seen in over fifty years and were presumed to be extinct have been found alive and well on remote mountaintops in Queensland, Australia.

Fewer than twenty South American jaguars still exist in Argentina's Gran Chaco region. Now lawyers representing Greenpeace Argentina are arguing before the country's Supreme Court that the species should have its rights recognized as a strategy for saving them. 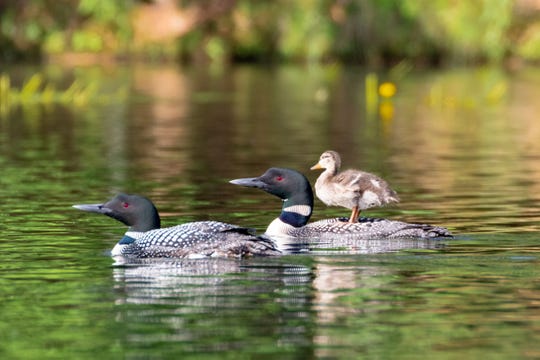 Photo by the Loon Project.

Cross-species adoptions are rare in Nature but they do happen. In Wisconsin this summer a pair of Common Loons lost their chick. Around the same time, a Mallard duckling became separated from its family. The loons responded to the duckling's distress by adopting it. They are now one functioning blended family!
weekly roundup