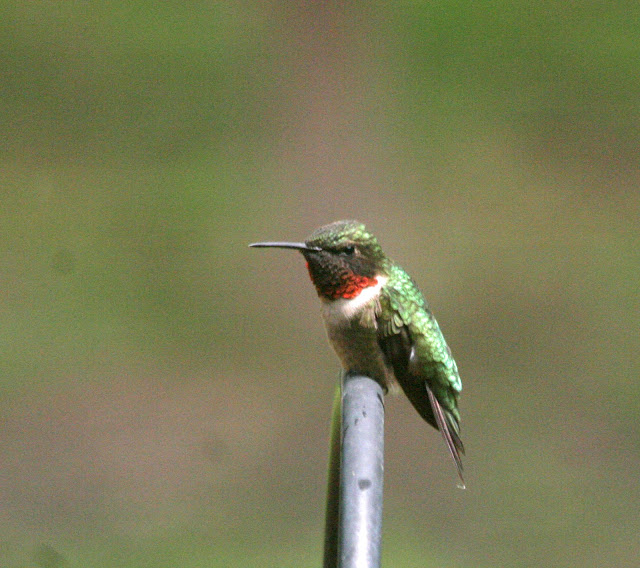 It's about time for male Ruby-throated Hummingbirds like this one, which I photographed a couple of years ago, to start showing up in my yard. The adult males always lead the way on migration, followed by adult females and the subadults. By the end of April, they should all be here, but I haven't seen one yet.

How many birds can you see in the county where you live? Matt Boone has some information about that, along with a map that quantifies the "birdiness" of counties around the country.

Companies that cater to the needs of those who love the outdoors are very concerned about the direction that the government is taking and the damage that is being done to the places that their clients love. They are banding together in an effort to lobby those in power to protect public lands. Their aim, they say, is to "organize like the NRA."

The tragic story of North America's only native parrot, the Carolina Parakeet, extinct now for one hundred years, is still something of a mystery, but more is being learned about it. The latest research shows that the bird's likely range and climate niche was smaller than was previously thought and that at least some of the population was migratory.

Paleontologists are joining with conservationists in the fight to save the Bear Ears National Monument in Utah. It is an important site for unique fossils as well as an important wildlife ecosystem and the paleontologists fear that allowing mining or drilling in the area, as is proposed by the present administration, could destroy those fossil sites.

An extinction crisis is rippling though America’s wildlife, with scores of species at risk of being wiped out unless recovery plans start to receive sufficient funding, conservationists warn. One-third of species in the U.S. are vulnerable to extinction, a crisis that has ravaged swaths of creatures such as butterflies, amphibians, fish and bats, according to a report compiled by a coalition of conservation groups. A further one in five species face an even greater threat, with a severe risk of being eliminated amid a “serious decline” in U.S. biodiversity, the report warns. Conservationists are calling for a swift, concerted effort to protect the endangered and threatened species.

The Trump Organization's repeated environmental infractions at properties that it owns have been legion and the group's method of responding to regulators' attempts to resolve issues has been to delay, dissemble, shift blame, haggle, and get personally involved. Rarely have they ever actually paid the fines or done the clean-up required by law.

The Kirtland's Warbler has bounced back from near extinction and now new research on the bird is helping scientists to understand the important role that winter habitats play in the breeding success of migratory birds.

It has been believed that the Amazon rainforest has existed in a completely natural state without interference from or management by humans, but new information is casting doubt on that theory. Archaeologists have discovered eighty-one ancient human settlements in the Amazon basin and it appears that they may have been a part of a chain of communities that crisscrossed the entire basin.

Conservation organizations have been working with Dutch dairy farmers to try to make their farms as sustainable and Nature-friendly as possible. BirdLife International reports that considerable progress is being made.

A treaty negotiated in the 1980s could potentially give Canada the power to prevent drilling for fossil fuels in the Alaska National Wildlife Refuge and could help to save the Porcupine Caribou herd and its habitat.

There has been an extreme rise globally in investments in the dirtiest of fossil fuels, such as tar sands, during the first year in office of our current president.

A citizen science project in Ontario has documented a significant decline in the population of American Woodcocks there since 1968, and the rate of decline has increased over the last ten years.

On the other hand, the South Florida Wading Bird Report, recently released, shows mixed results. Some birds have declined but others have held steady in their population and some have actually increased.

A research project among seabirds in South African coastal colonies has been halted because of an outbreak of avian flu. It was feared that researchers would accidentally spread the flu virus to other areas.

Here's a bit of good news to end with: We know that amphibians have been hard hit by fungal diseases in recent years and it had been thought that some frogs had been entirely wiped out. But now scientists have found that at least some of the frogs that were feared lost have survived and are making a comeback. 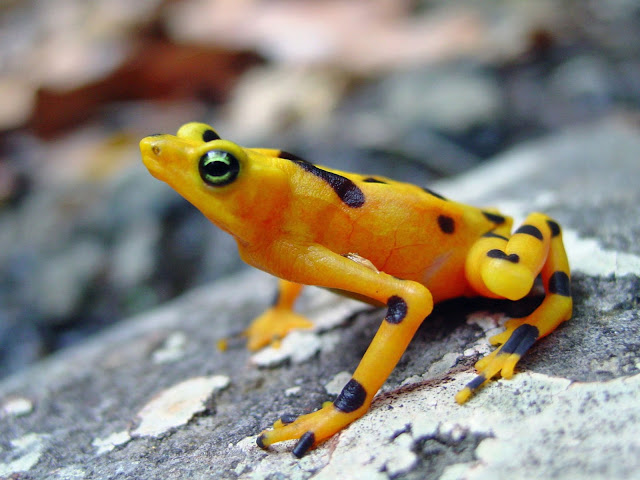 Frogs like this healthy variable harlequin frog with golden coloring, found in the streams of Panama. There is still hope.