The Book of Joan by Lidia Yuknavitch: A review 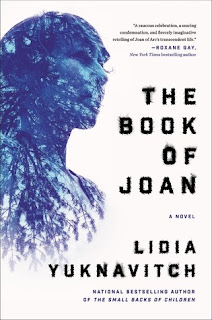 I remember the thrill I got the first time I read Frank Herbert's Dune, lo those many years ago. After that, I waited impatiently for each new entry that Herbert made to the series. Arrakis was real to me. The characters who contended to control it were real to me.


I was reminded of all that while reading The Book of Joan; it gave me that same kind of shiver along my spine.

Lidia Yuknavitch has created a post-apocalyptic world of our not-too-distant future, but a world where evolution and technology have been speeded up exponentially by the effects of incessant warfare and uncontrolled global warming. It is a world where the surviving "humans" have lost everything corporeal that made them human. Their heads are "white and waxen. No eyebrows or eyelashes or full lips or anything but jutting bones at the cheeks and shoulders and collarbones and data points, the parts on our bodies where we interact with technology..." Their "skin is Siberian. Bleak and stinging."

They are genderless, hairless, pale creatures who spend their time burning stories into their skin with a cauterizing tool. There are no books, so their skins have become the repositories of literature.

These human creatures live on a man-made, free-floating colony called CIEL that is suspended above the dying Earth. These survivors are the one percenters; they are the ones who were rich enough to make the move from the planet. There are still some human survivors on Earth itself, but they are the rabble.

CIEL is made of the redesigned remnants from old space stations. It is ruled by the evil Jean de Men - note the name which evokes both men and demons. It is an appropriate name.

One of the survivors on Earth is Joan. She is considered a heretic by de Men. She is an eco-warrior, a defender of the planet and its environment. Jean de Men claims to have defeated Joan and her army in a battle at the Alberta Tar Sands and he claims to have executed her. But, like much of what this tyrant says, it is a lie - Joan lives.

CIEL was designed by Trinculo Forsythe as a sanctuary for those displaced by Earth's wars, but he is appalled by what it has become under the rule of de Men. He has rebelled against the system and has undergone years of imprisonment and torture. In the face of all that, he still persists.

Christine Pizan is a partner of Trinculo and is also a rebel. She is the primary narrator of the book. She is determined to keep the heroism of Joan the eco-warrior alive by burning the story into her own skin. This is the "Book of Joan" that she is narrating for us. The physical pain caused by burning her epidermis to create the book is symbolic of the ecological devastation that the planet feels.

The survivors on Earth live mostly underground in caves, and one of the interesting aspects to the story is the attention the author pays to describing other flora and fauna that have survived the apocalypse by living in these spaces. And so we learn about oilbirds, ribbon eels, long-eared rabbit bats, spiders, worms, and olms, a kind of blind salamander that has electrical receptors in its epidermis. Yuknavitch has created an altogether believable version of a post-apocalyptic Earth, filled with the details of such creatures.

And what of de Men? Is he believable? Is is credible that such a creature could become a ruler of an empire? He first found fame as a self-help guru and has moved on to propaganda and mythologizing, deploying information (or disinformation) as a weapon. He is a buffoon, but a terrifying buffoon, and the world he rules is a hellish place. As Christine narrates about her world:

We are what happens when the seemingly unthinkable celebrity rises to power.

It is a thought to conjure with.

I find it virtually impossible to summarize the plot of this book. Suffice to say that Yuknavitch's dystopian novel is filled with passionate and lyrical prose which seems both very current and also visionary. One can almost feel her white-hot rage at what has been done to the Earth and to the people and other inhabitants of Earth. She tells the story of Joan provocatively and with precise realism. It is a vivid tale of the future. A cautionary tale.