Throwback Thursday: The Signature of All Things by Elizabeth Gilbert

December 17, 2015
In December of 2013, I read a book by Elizabeth Gilbert that I thoroughly enjoyed. No, it wasn't Eat, Pray, Love. It was a novel written after that blockbuster book. It was about a woman scientist in the 19th century and that book was recently recalled to mind by something that I read. I reread my review of it and decided to feature it as a "Throwback Thursday" post. I hope you enjoy it.

The Signature of All Things by Elizabeth Gilbert: A review 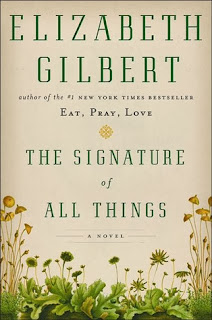 Elizabeth Gilbert of Eat, Pray, Love fame has written a remarkable novel featuring a remarkable woman of the 19th century. Alma Whittaker, born in 1800 to the richest man in Philadelphia, grew up to become, in fact, a female counterpart to Charles Darwin in the century of Darwin, a time when the idea of a female scientist would have been laughed at.

Before we meet Alma, though, we meet her father, Henry Whittaker, a low-born Englishman who was banished because he stole plants from Kew Gardens, where his father worked as a plantsman. Instead of having him hanged, as could have happened, his father's employer sent him on a ocean voyage to assist his plant collectors. Henry already knew much about plants from his father, and now he learned even more as he traveled to exotic locations around the world. He grew into a man with an unquenchable thirst to succeed and accumulate wealth. He did both.

After his ties with Britain and Kew Gardens were severed, he went to Holland where he acquired a well-educated wife, named Beatrix, from a famous academic family. Together, they emigrated to the new country of the United States, specifically to Philadelphia and it was there that Whittaker built his prosperous plant empire. There, Alma was born and was educated by her mother and learned plants almost by osmosis it seems from her father.

Alma's world is disrupted when her parents adopt a child, a little girl whose parents died tragically on the Whittaker estate. She and her new sister, Prudence, who possesses an ethereal beauty, will never be close. In contrast to Prudence, Alma was plain as a baby and young girl and she grows into a plain woman, large, big-boned, and with an unruly crop of red hair which seems to sprout in every direction.

Her gift is not physical beauty but a beauty of the mind. She is a brilliant child who grows into a brilliant woman, ultimately a self-taught botanist of considerable gifts and some renown.

While her sister and best friend marry, Alma remains single. She becomes a spinster who is most excited by her love of knowledge, but at the age of forty-eight, she does fall in love with a man named Ambrose Pike, a utopian artist who paints incomparable pictures of orchids. Ambrose leads her to delve into the realm of the spiritual and the magical - quite a journey for a clear-minded scientist like Alma.

The two marry quickly but their marriage is doomed by misunderstandings and they soon go their separate ways. At this point, Alma's story is just beginning!

This sprawling novel takes us around the globe and is peopled by so many unforgettable characters. Among them are abolitionists, adventurers, sea captains, missionaries, astronomers, geniuses, and some who are quite mad. But most unforgettable of all is Alma Whittaker as she passes from the Age of Enlightenment to the age of the Industrial Revolution and witnesses all the extraordinary changes along the way. New ideas in science, religion, commerce, and class were coming fast and furious, and Alma is a part of it all.

Some reviewers have described this book as Dickensian and indeed it does seem to be written in the spirit of Dickens' time. But it is in a thoroughly modern voice and is very accessible, an easy read. I liked Alma Whittaker very much and I am glad that Elizabeth Gilbert chose to give her to us.

View all my reviews
Throwback Thursday