July 03, 2012
Native Americans of what is now the northern and eastern United States historically had special names to identify the full moon of each month of the year. Each of the names was related to an event in Nature that occurred around that time. January, for example, was the Wolf Moon, February the Snow Moon, March the Worm Moon and so on through the year.

Tonight marks July's full moon which actually had more than one name, but the most frequently used was Buck Moon. It was called that because this was the month when the new antlers of buck deer normally emerged. But some also referred to it as the Thunder Moon because thunderstorms frequently occurred around this time.

Now, August will be a very interesting month for moon watchers like myself because it will feature TWO full moons, the first on August 1 and the second on August 31. The one on August 31 will be the third full moon of the season and is what is referred to as a "Blue Moon." The "normal" August full moon that comes on the first is known as the Sturgeon Moon or sometimes the Green Corn Moon.

I find the lore related to the naming of the moons very interesting. It tells us much about the Native Americans' culture and their observations of and close relationship with Nature.

But whatever you call our moon, she's a beauty, and never more so than when she shows us her full face. Get outside on this special night and give her the admiration she deserves. And while you're there, give her a wave from me. 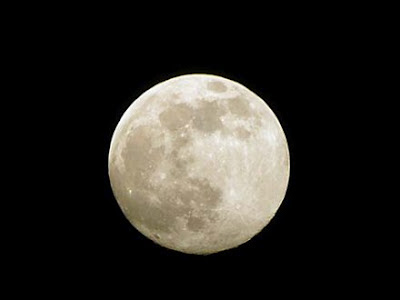