December 08, 2018
A roundup of the week's news of birds and the environment:

The Eastern Meadowlark is the American Bird Conservancy's "Bird of the Week." The iconic grasslands bird is a member of the blackbird/oriole family. Its habitat encompasses meadows, fields, pastures, and desert grasslands and loss of these habitats is contributing to the declining population of meadowlarks. Its status is now considered to be "near threatened," a status which it shares with many grassland birds.

Researchers reported on Wednesday that greenhouse gas emissions worldwide are growing at an accelerating pace this year. As growth surges "like a speeding freight train," it puts the world on track to face some of the most severe consequences of global warming sooner than expected. Scientists lay part of the blame for the increase on an unexpected upswing in the appetite for oil as people around the world not only buy more cars but also drive them farther than in the past. This has more than offset any gains from the spread of electric vehicles.

The protected habitat of the National Butterfly Center along the Rio Grande is about to be plowed up to clear the way for the unnecessary border wall. The bulldozers got a green light to begin this week when the Supreme Court let stand an appeals ruling that lets the administration bypass 28 federal laws, mostly to protect the environment, to build the wall in the Rio Grande Valley. Hundreds of thousands of butterflies flit through the center’s 100-acre sanctuary in Mission, Texas. But 70 percent of the land will eventually be on the other side the wall which could be up to three stories tall, with 18-foot steel beams, called bollards, rising from a concrete base. Construction through the refuge could start in February.

And in more bad news from the administration in Washington, they announced on Thursday that they plan to open nine million acres to drilling and mining by stripping away protections for the Sage Grouse, an imperiled ground-nesting bird that oil companies have long considered an obstacle to some of the richest deposits in the American West.

And the hits just keep on coming. The administration is poised to roll back a significant climate change regulation on coal-fired power plants, making it easier to build new coal plants in the United States. The proposal will eliminate Obama-era restrictions on newly built coal plants that in effect required them to include systems to capture the carbon dioxide they produced.

For decades, opposition to drilling has left the Arctic National Wildlife Refuge off limits. It is the last great stretch of nothingness in the United States, a vast landscape of mosses, sedges and shrubs that is home to migrating caribou and the winter dens of polar bears. Now the current administration is hurriedly clearing the way for oil exploration, hoping to turn it into just another oil field.

Up to 96% of all marine species and more than two-thirds of terrestrial species perished 252 million years ago in an extinction event that has come to be called "the great dying." Research has determined that the cause of this event was a rapid warming of Earth's temperature. Scientists believe this warming was caused by a huge spike in greenhouse gas emissions, potentially caused by volcanic activity.

The Western Monarch Thanksgiving Count began in 1997 and has continued yearly since then. It is a count of Monarch butterflies wintering in California and this year's preliminary data is alarming. It shows a drop in population of 86% since last year.

A vagrant Great Black Hawk has been causing birders' hearts to race in Maine. This species is a native of Central and South America and Maine is far out of its normal range. It appears to be a young bird in good health and apparently it possesses a spirit of wanderlust! 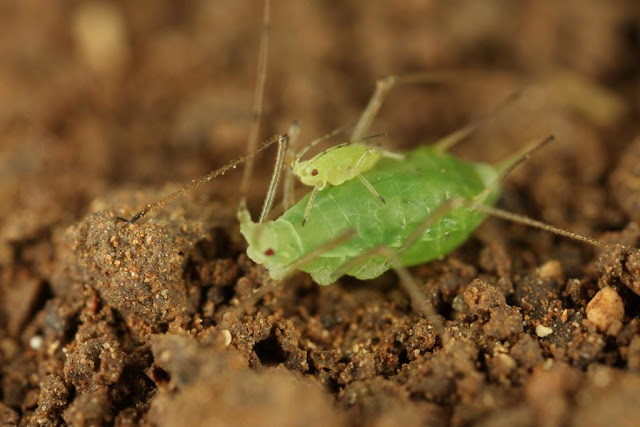 Tiny green aphid nymphs hitch a ride on the back of adult aphids when they are seeking safety. The adult aphids don't like it one little bit and attempt to shake them off but if they are unsuccessful, they settle down and allow the youngsters to ride.

A previously unknown species of salamander has been discovered in Florida and Alabama. It's a wonder that it has escaped notice until now because the animal is quite spectacular in appearance and it is two feet long. The critter is called a "reticulated siren."

"The Rattling Crow" blog has an appreciation of the pleasures of watching Cedar Waxwings.

Puritan tiger beetles are New England's most endangered species. They are predatory beetles and an effort is underway to return them to appropriate habitat where they can hunt once again. Scientists have now begun an unlikely effort to return them to the banks of the Connecticut River. 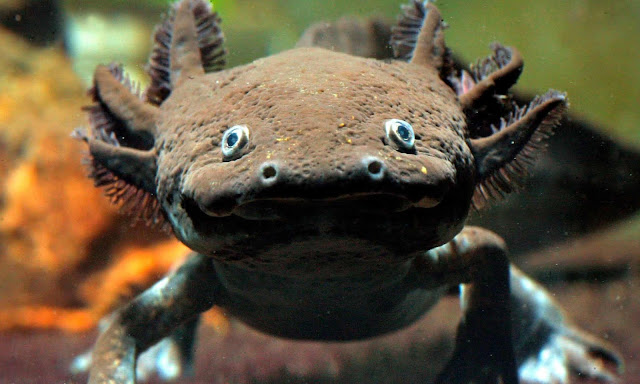 Image from The Guardian.
This strange looking creature is a salamander called the axolotl. It is native to Mexico and its image appears frequently in murals and graffiti where it is sometimes called the "water monster." The axolotl is in trouble because of water pollution and if drastic changes are not made, the iconic creature is racing toward extinction.

Some of Darwin's finches on the Galapagos Islands have developed a taste for human junk food and it may be impacting their evolution by changing the shape of their beaks.

The octopus has eight arms and three hearts and a very large brain. How did it get to be so smart? For decades, researchers have studied how certain animals evolved their intelligence, among them apes, elephants, dolphins, and even some birds, such as crows and parrots. But all the scientific theories fail when it comes to cephalopods, a group that includes octopuses, squid and cuttlefish, and which are now another rich field for study. 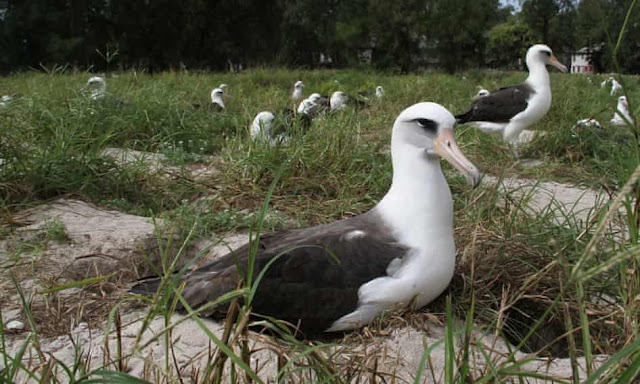 FWS image.
This is Wisdom, the oldest known wild bird in the world. She is a Laysan Albatross and she is known to be at least 68 years old and she's just laid an egg!

Wisdom was first banded in 1956 by biologist Chandler Robbins, who estimated that she was about five years old at the time. Biologists with the US Fish and Wildlife Service think the almost-septuagenarian has hatched and raised as many as 36 chicks over the years. Should her latest egg with her longtime lover, Akeakamai, hatch, fledge and take to the open sea, it will be her 37th.

She gives hope to us all. Long may she fly.