October 21, 2017
A roundup of the week's news of birds and the environment: 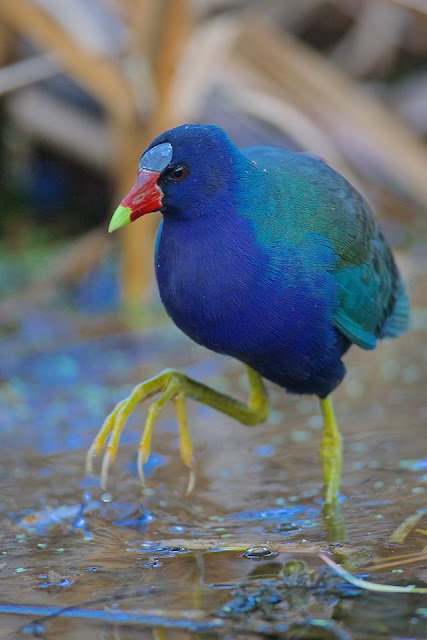 I didn't take this beautiful picture. (I can only wish.) I stole it from Allen Wildlife photographers. It is a Purple Gallinule, one of my favorite birds, and the picture was taken at Port Aransas on the Texas coast. In recent years, Purple Gallinules have extended their range northward and they are becoming more common all along the coast.

Republicans moved closer to opening oil exploration in the Arctic National Wildlife Refuge with a Senate budget vote late Thursday, setting off a new political scramble over the future of the pristine habitat in northern Alaska. The ANWR consists of about 19 million acres of pristine land in northeastern Alaska. The refuge, one of the largest in the United States, is the nesting place for several hundred species of migratory birds; home to wolves, polar bears, caribou and other mammals; and spawning grounds for Dolly Varden trout and other fish.

Remember those pictures of oil-coated wildlife from the Deepwater Horizon oil spill in the Gulf of Mexico in 2010? They were heartbreaking. But in fact research has shown that contact with even small amounts of the oil made birds sick, and the effects of that spill still reverberate throughout the Gulf region.

Americans are still dying in Puerto Rico and the Virgin Islands from the effects of Hurricane Maria. Throughout Puerto Rico, much of the drinking water is contaminated by sewage. Residents are beset by water and food shortages and, in many instances, lack of adequate medical care.

Meanwhile, Ireland has been hit hard by Hurricane Ophelia. Typically, in the past, such storms have weakened and dissipated over the cold North Atlantic but, with the heating up of the ocean's temperatures, the storms are becoming stronger and lasting longer. Northern Europe must now be prepared to deal with such events.

New Zealand is holding a "Bird of the Year" contest. Will it be the Kea or the Kiwi? The Bar-tailed Godwit or the Hihi? You can check the pecking order on the leaderboard here.

The beautiful Red-headed Woodpecker has been in a long-term population decline and the reasons for it are unclear, but Kenn Kaufman writes that, even in the best of times, these birds go through periods of boom and bust.

"The Meadowlands Nature Blog" gives advice on how to get your backyard ready for winter birds.

Our current president has said he is pulling us out of the Paris climate accord, but the administration is sending officials to Germany next month for the next round of negotiations regarding the deal, which begs the question, what gives you the right to be a part of negotiations for a deal that you've chosen not to participate in? Awkward.

Climate change is creating a shortage of appropriate food available to birds in the Galapagos Islands. Scientists are predicting a decline in the population of the islands' famous Nazca Boobies because of the food shortages.

A new study has shocked scientists with the findings that three-quarters of flying insects in nature reserves across Germany have vanished in 25 years. This has serious implications for all life on Earth since insects are an integral part of that life as pollinators and as prey for other species. 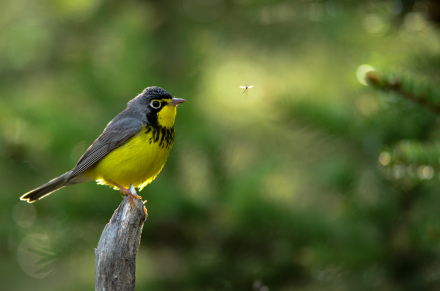 Canada Warbler image from The Auk.

Canada Warblers, like many species of birds, like to nest close to others of their species. This points to the need to keep adequate appropriate habitat intact so that the birds do not become overcrowded.

"Stokes Birding Blog" has advice on how to ID those hard-to-distinguish sparrows that can look so much the same to the casual observer and also how to attract them to your feeders.

The Interior Department is preparing to set aside a decades-old ban on development in federally protected wilderness areas by pursuing a controversial proposal to build a nearly 12-mile road through the Izembek National Wildlife Refuge in ­Alaska. Environmentalists, several native Alaskan tribes, and other critics warn that the road could disrupt the habitats of a variety of animals, most notably migratory birds that use the refuge as a crucial stopover on their marathon journeys along the Pacific Coast of North America.

Methane emissions from Alberta's tar sands are much worse than have previously been estimated, according to a new study.

The national parks, forests, and wildlife refuges of this country make up one of our most beloved and iconic social institutions. Together they represent perhaps the greatest accumulation of collective wealth and beauty in the world. Yet our political leaders neglect these lands with shocking recklessness. At the present moment the trails and roads, the bridges and buildings and other infrastructure on our national parks are crumbling. The Park Service reports a deferred maintenance backlog of roughly $12bn. The Forest Service, for its part, is grappling with mounting maintenance needs estimated at about $5bn. All this as public land visitation rates continue their steep and constant climb. We should insist that our politicians make the maintenance and protection of these precious lands a priority. And if they refuse to do so, we must be willing to vote for politicians who will!