February 12, 2014
This is a busy time at the backyard bird feeders. When I step out into the yard, it is common to see a hundred or more songbirds at the feeders and on the ground around the feeders. It is no accident that February is designated as National Bird Feeding Month and that the Great Backyard Bird Count which surveys where birds are in mid-winter takes place on this coming weekend. This is the month when birds are most visible in our yards.

And where the little birds gather, the larger birds that prey on them soon follow. In my yard, this means the two Accipiters, Cooper's Hawks and Sharp-shinned Hawks. 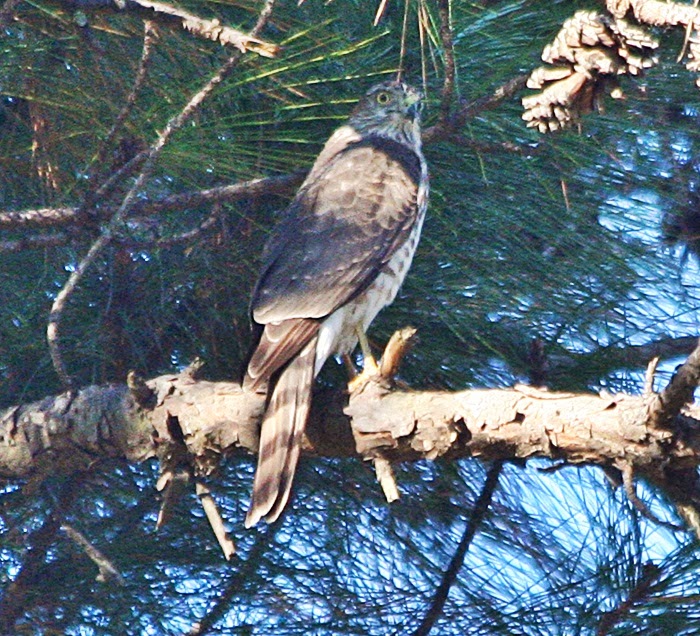 The larger of the two is the Cooper's Hawk, which is a permanent resident in our area, and I do see him around the yard throughout the year, chasing the birds that come to my feeders. Seldom do I see him actually catch one. There is plenty of cover in the yard and at the first warning cry from a Blue Jay, all the birds scramble for it.

In the field, it is very hard to discern the difference between the Cooper's and the Sharp-shinned. They are very similar in appearance. The Cooper's Hawk is bigger, but there is a difference in size between the sexes among these raptors; the females are quite a bit larger and so it is that a female Sharp-shinned might be as large as a male Cooper's. The most reliable field mark, I find, is the shape of the tail - if you can see it. I think you can tell from this picture that the end of the bird's tail is rather rounded. That is a trait of the Cooper's. 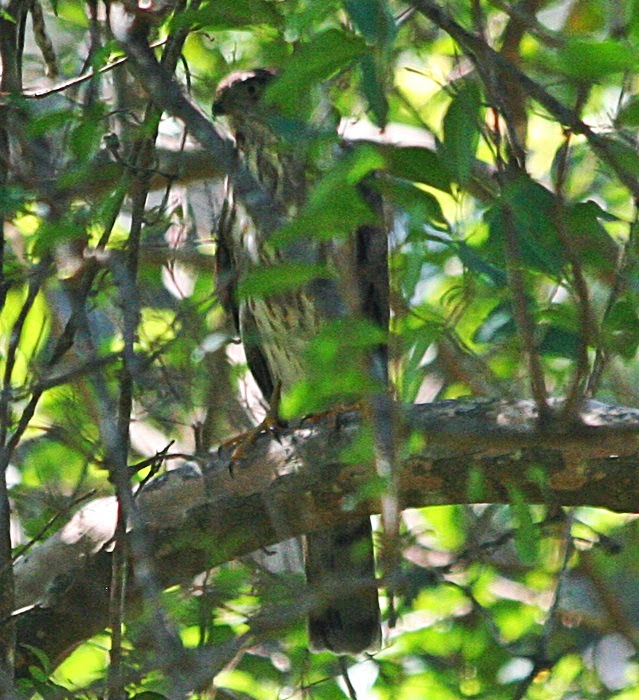 The Sharp-shinned, on the other hand, has a squared-off end of the tail. This bird, half hidden among the leaves of a tree, has that squared tail which marks him as a Sharp-shinned. The Sharp-shinned is a winter visitor to our area and, at this time of year, I see this bird almost daily when I am outside.

Both of these raptors are magnificent birds and it is a great honor to have them as a part of my backyard ecosystem. Some bird lovers who maintain bird feeders for songbirds hate the birds that prey on them and try to discourage them, but I see them as an essential part of the habitat.

They are beautiful birds and, after all, they have to eat, too. Nature made them to eat other birds and we can hardly fault them for fulfilling that function.
Cooper's Hawk Sharp-shinned Hawk