April 09, 2012
Last week, Reince Priebus, the Republican National Campaign Committee Chairman, was interviewed on Bloomberg Television by Al Hunt and was asked about all the anti-women initiatives that his party has sponsored right across the country over the past fifteen months. Priebus rejected the idea that Republicans are waging a war on women and then he made the following jaw-dropping statement:

So, let me get this straight. It's all the Democrats' and the mainstream media's fault that Republicans are being accused of a war on women. It has nothing to do with mandating unnecessary transvaginal ultrasounds, limiting access to birth control, rescinding equal pay laws, writing bills that would charge women who have miscarriages with murder, forcing women to produce written statements to their employers about the reason they need contraceptives in order for their group insurance to cover those contraceptives, legislation that would define a woman as pregnant two weeks before conception  - all of these are actual bills introduced by Republican legislators in recent months, all aimed at controlling women's wombs and their lives. But none of that represents a Republican war on women, according to Mr. Priebus. No, it's all those mean ol' Democrats' and journalists' fault.

As the wonderful Bug Girl points out in her blog today, in fact, the Republicans have been almost equally relentless in their war against caterpillars as well. They have repeatedly introduced legislation that would strip the E.P.A. of powers to regulate poisons being released into the environment, including actual pesticides that are used against caterpillars. I think it is quite clear that Republicans are pursuing their war on two fronts, both against women and against caterpillars, so I say, it's time for those of us on the receiving end of their constant artillery barrage to get together and present a united front. Women and caterpillars, unite! 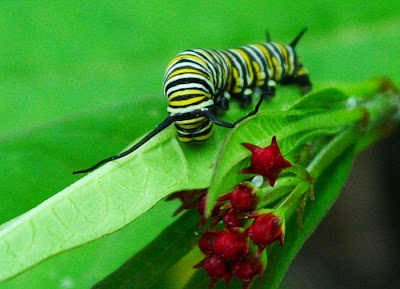 It's you and me, kid!
caterpillars Republicans war on women