The Spy Who Came in from the Cold by John le Carré: A review 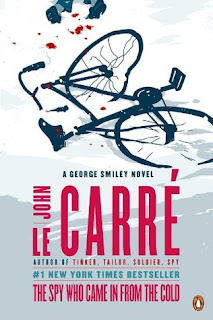 Continuing with my plan to reread John le Carré's George Smiley novels, I've now come to the third one and the best one so far. It had been many, many years since I had read The Spy Who Came in from the Cold and since I had seen the movie based on it. I must admit that even though I thought I vaguely remembered the plot, I found myself newly surprised and intrigued by what I was reading and it was difficult to put the book down. Moreover, the conclusion was just as much of a gut-punch as it was the first time around.
It almost seems a misnomer to call this a George Smiley novel because Smiley barely even appears in it. Instead, the central character is Alec Leamas.

It is the middle of the 20th century; World War II is history and the Cold War is well underway. The Berlin Wall is in place. Leamas is based in Germany and runs a network of British spies from there. But things are not going well. The spies under his command are being killed one by one. At first, he thinks it is a coincidence but then it becomes clear that they are being picked off and eliminated. When the last agent under his command is killed, Leamas is recalled to London.

He is burnt out and wants out. He wants to come in from the cold for good, but London has other ideas.

Leamas' boss is a man who is always referred to simply as Control. When Leamas indicates that he's ready to get out, Control convinces him that he must fulfill one last mission for British Intelligence. He is determined to bring down the head of East German Intelligence who is responsible for the deaths of all those agents in Leamas' network. What he wants is nothing short of destroying that intelligence organization. The plans for doing this are a convoluted scheme that will depend on the skill of Alec Leamas to convince the East Germans that he is disillusioned and ready to turn and cooperate with them. If he is successful, he will be able to lure the East German spymaster into ultimate defeat.

Leamas plays his role perfectly, except that along the way he meets a woman for whom he learns to care. Their affair ends when Leamas, continuing in his role, assaults a man and ends up in prison. He has warned the woman to stay away and to never talk about their relationship. Of course, if he had been advising one of his agents, he would have told him never to get involved and certainly never to fall in love. Any "weakness" will be exploited by the enemy.

Leamas continues in his assigned role in prison and when he is released. He is the disgruntled ex-spy and as such he is soon approached by the East Germans. Control's plan seems to be working perfectly.

As typical in a le Carré novel, all of the characters here are flawed and none of them are to be trusted. Some of them are brilliant and some of them are stupid, some compassionate and some cruel, but it is not always clear at first which is which. He spins out his tale in a manner that I consider absolutely brilliant. The sequence of the revelations about all these characters is quite simply spine-tingling. And just when we think we know everything, the author is always holding something back, some final twist that we can't possibly imagine. He never loses his way in his labyrinthine plot. John le Carré was the master of this genre. I don't know of anyone who has ever done it better.